I have spoken a couple of times about Jenny Lawson, aka The Bloggess.  She has an amazing blog and a couple of great books.  She is amazing.

Last week I travelled to Bookshop Santa Cruz in, perhaps not that shockingly, Santa Cruz, California, and met my hero.

Jenny wrote a book this year, Furiously Happy, and was doing a book signing.  I had bought the book (twice technically…) and I was going to the signing.  My wife had jumped at the chance to go, even reading both books to “prepare.”  I’m still not sure it is possible to prepare for something like this, but I appreciated the attempt.  The night before the signing we realized our son was coming down with a little bug and we had to do some real soul searching; taking a two-year old to a book signing a couple of hours away already seemed like it was an idea bordering on insanity, but the thought of taking a sick two year old on the same trip sounded like something that would get you murdered by a group of very angry people.

My mother wonderfully volunteered to go with me, saving me the unsightly task of begging.  We drove to Santa Cruz, arrived on time, mostly, then walked to the Bookshop.  It was packed.  Like bursting at the 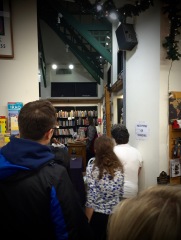 This was our view.  I may, or may not, be standing on a shelf.  Sorry Santa Cruz.

seams, chock full of awkward and mildly ill people; not in a death and dysentery kind of way, more like a “I’m going to hide under my coat until everyone is gone,” kind of way.  My mother and I found a place to stand, in a canyon of travel books.  We had a pretty good view, although not comfortable in any way.

The talk was over far too quickly.  I could have listened to her for hours.  Then we started lining up for the signing portion.  This is where it gets difficult for me; see, while I don’t like being surrounded by a lot of people, I really don’t like situations that require me to talk to people.  And even less than that, situations where I might embarrass myself.  Or do the wrong thing.  Or really anytime it seems I might be inconveniencing other people.  Like when I am forcing them to sign something.

My mom was there, trying to keep my mind off of it.  I was trying not to knock over tables filled with books.  I realized my fingertips were sweating, then I started worrying I was going to fling my book at Jenny.  I would be the one that hit Jenny in the face with her own book.  Then I was next in line.

I’m really not sure what I said.  I knelt down in front of her to be more eye level.  I looked at her and…I told her.  I told her thank you for making it ok 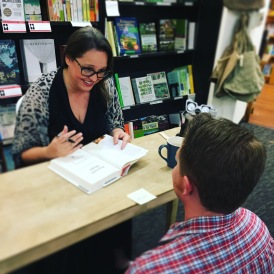 to be broken.  Thank you for making it so I could be honest about who I am.  For making it so that I could talk to my parents and wife about it.  That I have a blog.  That I’m working on a book.  And I know I can do all of this because of her.  She listened to me, agreed with me.  She added in points, about how it makes it easier to talk about it.  That we are a little less alone.  About how wonderful Twitter is.  She signed my book while doing all of this.  The drugs had obviously kicked in for her by this point, because there was no way I would have been able to do all of that.

There are so many moments from that night that aren’t written here: from meeting Jenny’s sister and recommending where to go find wine, to introducing my mother to a vanilla latte from Verve, and the talk on the way there, and the slightly more real conversation on the way home.  I will remember the awakward people in line, and the insane racoon the bookshop gave her.  I will remember that she really listened to me.

Everyone says, “Don’t meet your heros, you’ll just get let down.”  Meeting your heros isn’t so bad.  Not when your heros are this badass. 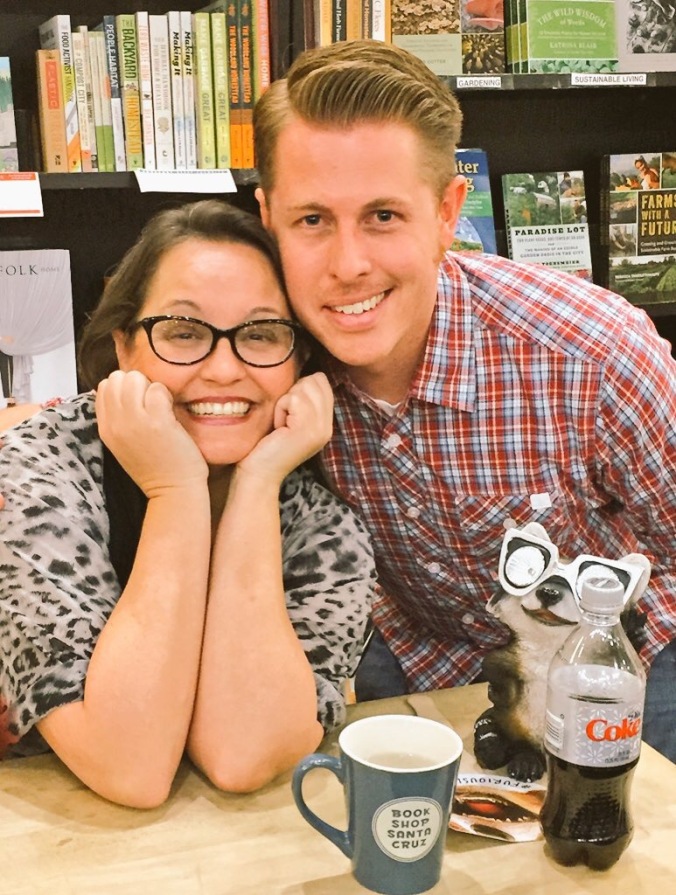 4 thoughts on “Well, at least I didn’t embarrass myself…”

Let me know what you think. Cancel reply